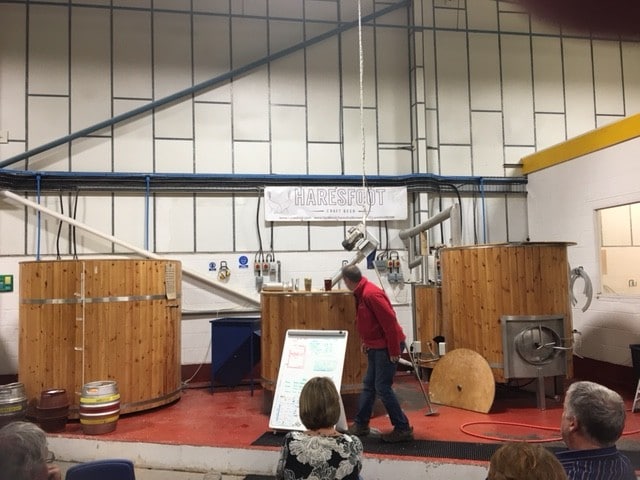 Last Thursday after work and after particularly busy week I visited the local brewery. Was I in need of some refreshment? Was I looking to cut out the middleman? Was I a digital accountant looking to get sloshed? Was I looking to support local business?

Well the answer is all of the above! I went along to our local brewery to check in on 8 likely lads of ages 50-60 who had had a mid-life crisis and been inspired to start a business brewing craft beer. This was around 2 years ago and I went along to see how they have got on developing their business.

The story of this particular piss up started with Gordon Brown. Yes, that right. I will explain shortly. In beer making, like many other industries, scale matters to be competitive and make strong profits. In order to get scale you need to sell a lot of beer. In order to sell a lot of beer you need to make a lot of beer. Virtuous circle complete. So born were big brands and big breweries who made a homogenous offering with mass appeal. That was the first chink in the armour right there.

Customers wanted something different but no one wanted to supply. The costs were too high, the profits too low and hence investing made about as much sense as lighting your home fire with £50 notes. Not something your accountant should recommend!

Gordon Brown actually laid the platform for the craft beer movement by creating a more level playing field between the small and big brewers. Knowing that the small guys could not compete on price due to lower scale something needed to be done. Introducing the progressive beer duty. Lower taxes for smaller brewers and higher taxes for the larger ones. Stage set…..well almost.

You still need entrepreneurs to invest though and they will only do so if they can see a customer need and demand (check) and also at least cover costs with the chance of making a return.

In this case they used a generous tax scheme for new businesses that enabled the individuals to get 50% of the investment back with the company retaining 100% of the proceeds. On top of that the investment would be capital gains tax free in future should they sell the shares they bought with the investment. No one likes to plan for failure but they gained some comfort from knowing that if things didn’t work out they could offset those losses against tax as well… reclaiming even more money against their original investment. Here at Next Level Business we love SEIS schemes.

The secret recipe of beer is water, hops, yeast and malt so the guys at Haresfoot Brewery in Berkhamsted told me. They seem to have combined them particularly well I must say. I speak with authority on that as I made sure I spent time trying everything they had!

So if those 4 basic ingredients are needed for making beer, what do you need to make a beer business?

Well even fewer things really. People and a plan. That plan should include all the usual things like the product, brand, distribution etc but also how to fund the business.

With the plan laid, investment raised and after 2 years they have created a highly successful craft brewery.

If you are thinking about investing in a business, growing your existing one or generally want some advice on how to make the most of the opportunities out there then get in touch and we will only be too happy to chat (over a pint?)